There is a whitepaper about new features of ASP.NET 4.5, dozens of blog posts, videos from conferences, some tutorials and MSDN.aspx) topic describing overall changes. But why there are no reports about what types were actually added in .NET 4.5 Beta? Where are lists of “new types added to assembly N” or “types that became public in assembly N”? I understand that these lists are not very interesting and that it is more convenient to read descriptions of the new features. Nobody cares about details until they start working against you. And this is normal, right and ok, but now I have some free time and I want to share info about new types that were added or became public in .NET 4.5 comparing to .NET 4.0.

It is pretty simple to do compiled assemblies diff if you have NDepend or similar tool, but what if you (like me) have no license? I started thinking to enumerate public types via reflection, but soon recalled that .NET 4.5 beta replaces assemblies of .NET 4.0 during installation and Assembly.LoadFrom will not work. To overcome this I decided to parse and compare XML documentation that comes along with all .NET assemblies. Simple as that, every public type is documented and difference between old and new version of documentation will give me at least names of types. 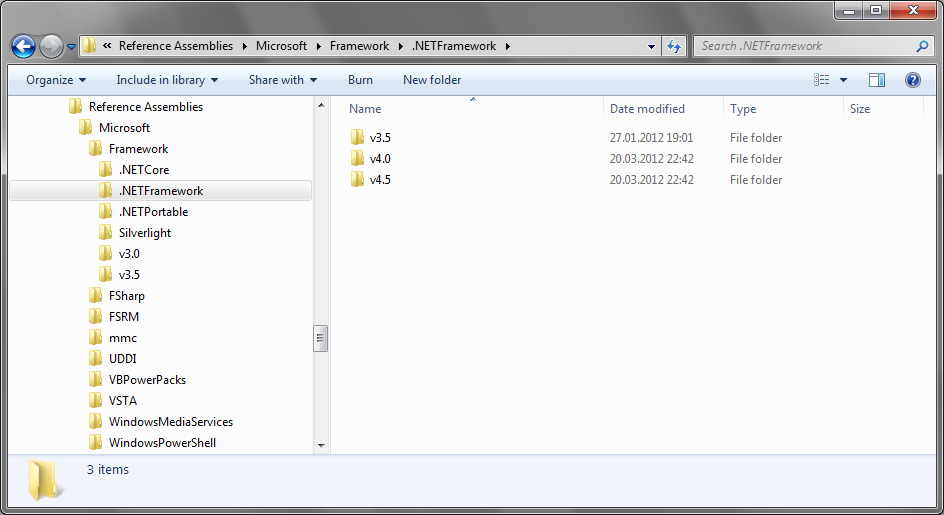 What I wanted is to get some statistics. There are 969 new public types in .NET 4.5. But it does not mean that those are completely new things, because it is not, it means that out of the box .NET 4.5 Beta has +969 new types comparing to .NET 4.0 and now there are totally 14971 public and documented types in .NET 4.5. Almost 15K only public types - that’s incredibly huge number. 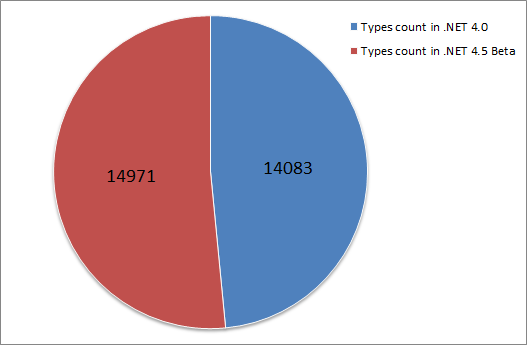 Most of new types are located in System.IdentityModel, System.Web and System.Windows.Controls.Ribbon assemblies. Taking into account that System.IdentityModel is providing authentication and authorization features and System.Windows.Controls.Ribbon is UI library allowing use of Microsoft Ribbon for WPF, we can make a conclusion that vast amount of new changes is connected with web. 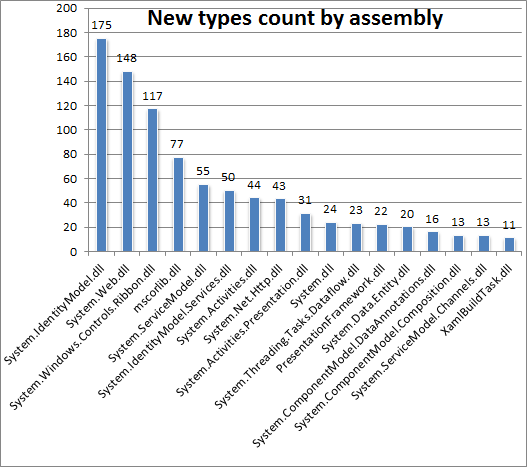 But the most interesting thing was to examine minor changes and see that something new and really useful has been added. And I encourage you to look over list of new classes and I bet you will find something interesting.

LINQPad script with which I did the documentation comparison is listed below. Excel report with some diagrams is also available online.

And at the end here are links that will help a bit to embrace the changes of .NET 4.5 Beta: